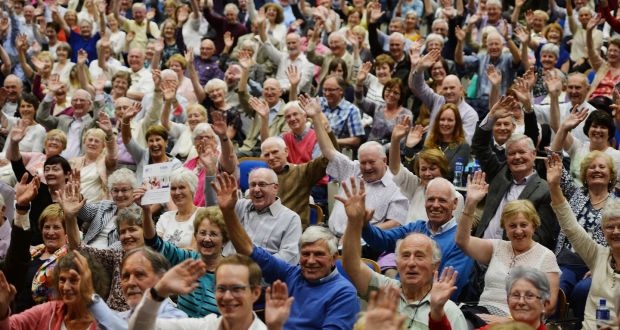 I’m old school. I still get the newspaper delivered. Primarily, because it is our therapy dog Lacey’s morning routine to get the paper and bring it to me. How could I interfere with her sense of purpose? Besides, I like turning pages and I don’t really mind a little smudgy newsprint on my fingers.

Not really out of step with news delivered electronically, I am a fan of the podcast medium. I really love the segment “Can’t Let It Go” from NPR Politics podcast. Once a week, usually three or four of the correspondents talk about something from the current week that they “just can’t let go, politics or otherwise.”

I would love to air my “Can’t Let it Go” and my hope is that it will become yours as well. The year 2030 marks an important demographic turning point in U.S. history according to the U.S. Census Bureau’s 2017 National Population Projections. By 2030, all baby boomers will be older than age 65. This will expand the size of the older population so that 1 in every 5 residents will be retirement age. In Arizona it will be nearly 1 in every 4 residents. By the year 2030, there will be twice as many people over the age of 80 as there were in 2016 and the fastest growing demographic in the United States is people older than 90.

Why haven’t any of the 2020 presidential candidates addressed the aging crisis?

This rapid growth of the older population contrasts with an almost flat youth population (under age 20) and moderate increase in the working-age (aged 20 to 64) population projected over the same period. In a nutshell: The potential pool of family caregivers, will not sustain the growing demand for care.

Family caregivers make up a silent support army—without them, health and social systems within our aging societies would be absolutely overwhelmed. Compounding pressure on this unpaid labor force is a shortage of paid caregivers. These unsung heroes who tenderly care for our aging population with skill and compassion perform an important job that our society does not sufficiently value.

I can’t let it go. It is time to move issues of longevity and aging to the political mainstage. Congress and the White House have continuously kicked the can down the road, effectively waiting for the issue to become a crisis before they deal with it. We need to ask our candidates how they are going to affect change? Addressing health care is not the only facet to addressing the needs of our aging population.

Normal aging increases the incidence of disabilities. Nearly 40% of people age 65 and older had at least one disability and need daily assistance, according to a U.S. Census Bureau report that covered the period 2008 to 2012. Of those 15.7 million people, two-thirds of them say they had difficulty in walking or climbing.

Do you know that less than 2% of our housing stock is built to be safe and accessible for elders? One third of our elderly population fall each year and falls are the leading cause of death in people over 65. About 75% of all emergency room and urgent care visits for people over 65 are the result of falls. Question to the candidates, how can our communities become more aging friendly? Routes of public transportation were created with young workers, not retirees in mind. Ask our candidates how to remedy the social isolation due to lack of transportation options. Speaking of social isolation 1/3 of our population 65 and older today lives home alone. It is projected this number could climb to close to 50% by 2030. Social isolation is said to be the equivalent of smoking 15 cigarettes a day.

I can’t let it go! The prolife/prochoice debate appears in the news daily. The caregiving crisis is a woman’s issue that faces women during and beyond their child-bearing years. The caregiving crisis disproportionately affects more women. More than 88% of family caregivers are women. And a startling new statistic is that nearly two-thirds of Americans with Alzheimer’s are women. Half of the family caregivers work full time in addition to their family responsibilities for caregiving with 18% of caregivers leaving their full-time job to care for a family member. The impact on the caregiver is loss of health insurance, loss of retirement benefits, diminished assets and lost credits toward social security.

I can’t let it go, is aging not tweet-worthy, Washington? Where is the aging pride parade? Mr./Ms. Candidate, what is your biggest idea for what America’s 68 million retirees could be doing to contribute to our society?

In 1961, JFK committed to landing on the moon in the next decade. We need the commitment to proclaim a bold goal of stopping Alzheimer’s as our moonshot. I can’t let it go!

Calling out to my favorite podcasts, NPR’s Planet Money: Why are we not talking about the economic impact of the silver tsunami? The New York Times, The Daily: Where is your deep dive into these issues? To my daughter, Samantha-Jo, a Washington D.C., broadcast journalist covering Congress, please for your dear old dad, ask the tough questions. I can’t let it go!